Institute of Livelihood Research and Training (ILRT) takes seriously the documenting of experiences / best practices in all realms of rural development and particularly around Livelihood promotion. A participatory workshop process (also known as writeshops) pioneered by the International Institute of Rural Reconstruction (Philippines) and tested for over 20 years in over a hundred workshops has led to the production of that many titles. ILRT itself has engaged itself in several writeshops and has produced more than 200 case studies among other things.

To prepare for the workshop, a steering committee lists potential topics and invites resource persons to develop first drafts on each topic based on guidelines provided. This process is the key to the quality of the final product. Participants bring the drafts and various reference materials to the workshop.

The resulting publications are simple, user friendly and of very high quality (see example in Annex 1).

During the workshop, each participant presents his or her draft paper using an LCD projection. Copies of each draft are also given to all participants, who critique and suggest revisions. What is unique is that the papers are read verbatim – the idea being that the reader will not have the writer to explain what he meant. It is therefore very important not to get into lengthy explanations (like usually done over a powerpoint presentation) but rather read the script ‘word by word’.

The writeshop also brings in a set of ‘English editors’ who are ideally non-technical people – the idea being that the writing should follow a layman’s style rather than that of a subject matter specialist, which in turn allows people at all levels (from grassroots worker to a policy maker) to understand the concepts well.

After each presentation, an editor, who is assigned to a particular author, helps revise and edit the draft. This is based on the constructive criticism that is received immediately after the presentation.

Likewise, based on the discussion and agreements during the deliberations, an artist prepares illustrations to accompany the text. In some cases the publication can decide to have artwork as well as pictures, either or both.

Again, a set of experienced desktop publishers work on the draft and artwork to produce a second draft – this being laid out exactly as the publication layout is envisaged to be. Each participant then presents the revised draft to the group again using LCD projection but this time in the format it is going to be published. The audience once again critiques and makes further suggestions.

The draft is thus revised further to generate the third draft. Towards the end of the workshop, the third draft is made available for all participants again for final comments and revisions. A skilled editor then puts all final drafts together into a publication. The workshop usually last anywhere between a few days to two weeks, and has a neat mix of professionals on the topic, community workers and other related practitioners.

Advantages of the workshop approach

First hand experiences are written about by the field workers themselves. This makes the document authentic, but simple as opposed to some academic publications that field workers may find difficult to understand and use.

There is both peer and audience pre-testing through the process.

It gives an opportunity for the field workers, who would otherwise have no time and means or even the skills, to write on pertinent issues and present case studies from their field work.

In some cases where the publication is envisaged to be more conceptual than factual (i.e., case studies), this process is about the best as it allows for practitioners to come together and ‘think together’.

It also allows the point of views of a variety of practitioners ranging from NGOs, academe, governments, researchers, field practitioners, policy makers, etc. – all sitting in one workshop and collectively agreeing on principles, concepts and approaches.

The above allows for non-biased publications that are very well accepted by various sectors.

The process also encourages to bring in major players in the thematic area in question to come up with a joint publication thereby increasing the ownership and eventually the readership of the publication.

It takes a short time to produce such valuable publications.

The diversity of skills, experiences and organizational backgrounds make for a broad mix of important ideas.

Schematic representation of the process 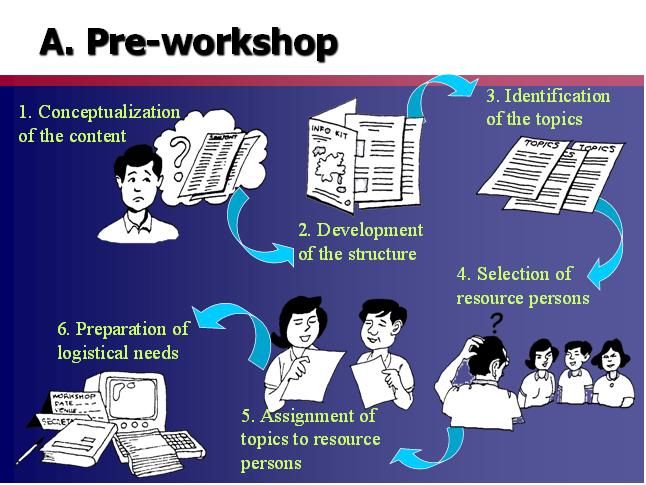 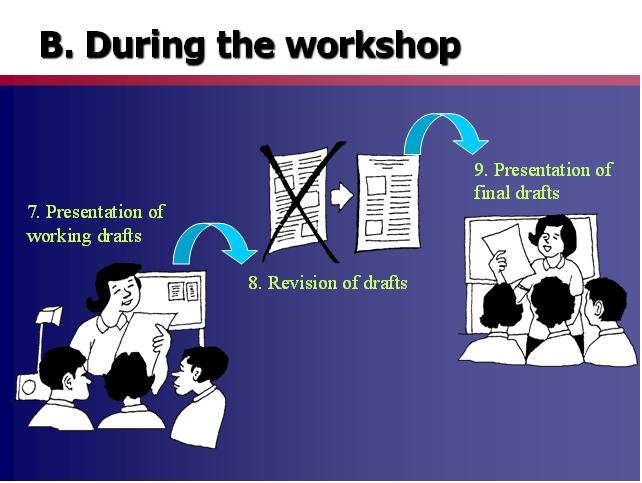 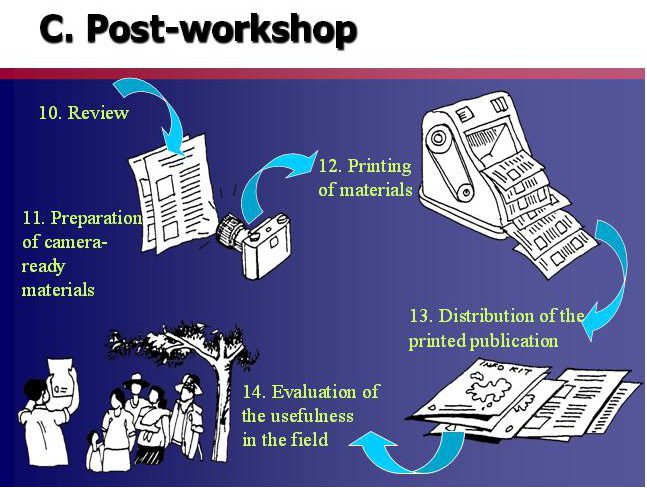